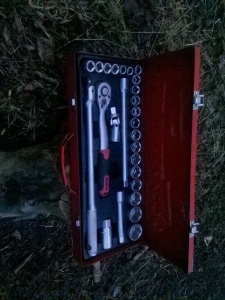 Tools are tricky. Well not all of them and to be honest after a while any tool what so ever is easy to maintain and handle as the user experience has gained. The learning curve of course varies a lot.

Let’s take such as a hammer. A somewhat blunt instrument for hitting. Anyone can use it. Anyone can hit with it. Anyone can hurt themselves with it without any particular training. Nevertheless it is hard one to master. I’ve watched the master carpenters hammering down floor boards in such speed and accuracy that I doubt there’s no way of me getting there. Well not at least by watching. As a friend of mine used to say: You learn to run by running. The same applies to hammering. No, you don’t learn to hammer by running, even for some of it might sound tempting, but I doubt that’s the way it goes. What I ment – for those who still are running with the swinging hammer – is that you learn to hammer by hammering. A lot. They say it takes 10000 hours to master something. Or was it 10000 repetitions. Give and take a few. So as far as I see: there’s no way I can get hammering that much. I already have this writing and working to do.
And that’s the normal excuse on not mastering anything. The road is long, I don’t have time and besides the next guy does it already so well; the Polish (or Estonian, Mexican, you name it) do it cheaper and faster.
But consider this; the road ahead starts from the first step. That’s all you have to take. Once again, drop the hammers and stop running. I’m all metaphores here, the action comes later. Yes, I know, boring. But pay attention.

We here are proud owners of knowledge, gathered knowledge. We’ve done it at work, at customer premises, while killing time in between the assignments, on courses or in the evenings when you could do something else with your lives. You name it. We all have it.
Now let’s imagine that we could have a vault of combined knowledge. A stuff we could get into and read and contribute and flourish with our knowledge. Actually, you might kindly point out, there is. Some might call it the internet. The googlepedia, whatever. The truth is out there. And in here, too. It’s inside ourselves. And we do use it, don’t we.

So the trick on knowing more and spreading the already gathered knowledge is not that hard. Not at all. And that’s precisely what I’m trying to point out in here; don’t just take the first step. Take also the next. And the next. Keep on going. Hammer down the obstacles of your mind (there! You see, there was use of that hammer after all!) and walk on. But most of all spread the knowledge, don’t sit on it. The more you give the more you get. Really.

And that’s what this blog is about to be. A forum for me to boast myself (as always, I’m the most humble and modest guy of the world) and spread the word on the tools I’ve used and evaluating to get some order to them.